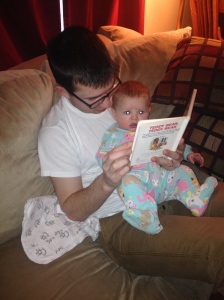 This morning at 4am I woke up to a nudge from your Mom.  Slowly, I disconnected my dream (where I was struggling to live with a permanent disfigurement…my hands and soles of my feet were permanently lotioned.  It’s more terrible than it sounds) from reality.

Your Mom asked if I could pick you up out of your whatever-it-is-called-that-you-sleep-in, and change your diaper, because you had woken up.  I got out of bed happily this morning, because I’ve been so sick the last 10 days I’ve had to take sleep aids, and your Mom has been on her own.  She’s a saint. Anyway, I got out of bed happily, because I absolutely love being depended on by you.  I love that I can pick you up, take you to where you need to go, do what must be done (it’s more serious some times than others), and bring you back to your Mom to be fed. Honestly, it is one of the most thrilling things I do.  I’m not kidding. I really, truly, love you. When you are wailing, when you are disinterested in me (is Sophie the Giraffe really that great?), and even when you poop out of your diaper and up your back. Still not sure how you do that. But I love you, every moment.

I know that these moments of being depended on will not last long. Someday soon you will stand up for yourself and I’ll cling to those moments where you still need me (unless somehow you don’t inherit the run-into-walls gene from me). But then one day, you’ll be standing at your bus stop (your Mom and I still are debating schooling.  Maybe a bus stop.  Maybe your Mom will just take you to a library and tell you to read), and you will be going somewhere where you will be on your own.  You’ll learn things, and every day you are gone, you’ll come back home a little older than I remembered you last. I know there will be times that I’ll miss these early days. But I also know I will be so proud to see you become more and more of the woman you’ll end up being.

When those days come, and you are surrounded by girls your age, whose parents let them watch movies (we will let you watch movies, well, maybe, Miracle probably. And Rock-a-Doodle. And probably Newsies.), and whose time on television or the computer aren’t monitored, or who start texting boys at age 9 (this, you will not be doing), I hope that you will be able to learn ONE thing from your Dad and take it with you into your teenage years.

Well, date your Dad then, I mean, we’ll go out to eat and stuff and I’ll ask you all about everything and give you rings and letters and it’ll be great.

But don’t date who I was.

When I was 18 years old, I had gone on dates, but never “dated.”  Not by choice. Oh no. Not at all. I like to think I had good taste. I never really pursued any girl at any point who I would look back on now and say, “Wow, what was I thinking??!?!” Every girl I can recall wanting to date, and the girl I did date, (before your Mom…I didn’t even know Mom then, give me a break!), has been someone who I still respect today. I’m very glad of that.

I, on the other hand…was a faker. I was a guy who you will probably come into contact with as a teenager. And I want you to hear me, here Lindy: I wasn’t purposefully, and wittingly fake. I just was. I worked to find what a girl I liked seemed to want in a boyfriend…and I worked on being like that. This happened because I wanted to be depended on. I wanted to fill the role of strong, trusty, sensitive but tough, doting boyfriend/ideal future husband. I wanted to. My words, and some of my actions (the most noticeable ones), lent themselves to a persona that I had worked on, not character that had been developed.

Now there are lots of girls who do the same things (Lindy, thank the Lord with me that your faker Dad never met another faker), but Lindy, based on your Mother…ain’t no way you’ll be one of those (please). So with that being said, I wanted to give you just a couple things to watch out for when it comes to dating.

First, don’t date until you are 22. That’s pretty much it, actually.

Honestly though, dating is fun, but if you aren’t dating the person you’ll marry…it can quickly become less fun. There is no biblical command to date someone in high school. There isn’t even a social one. Dating in high school isn’t wrong (it is for you, though), but it is often unhealthy. I find that this is because one or both parties tend to be discovering about themselves so much during those years, that dating can stunt that personal growth, or disfigure it. In your Dad’s case, he wasn’t even in High School when he started dating. But he still didn’t know who he was. He spent so much time crafting an image for others, his personal growth was stunted completely, and it didn’t really refresh until years down the road. I’m convinced that people are getting married so much later today, because they are dating so much earlier than before (and the definition of dating has changed so drastically).

Secondly, be wary of boys who seek to create dependence, and who are indecisive. Your Dad was obsessed with Instant Messaging (I’ll explain it later), and would sit on it for hours just waiting for someone he “liked” to hop on. Then, guess what he’d do? Nothing. He’d wait to be reached out to, as if he wasn’t some huge nerd just starting at the screen playing out all kinds of scenarios in his head (I’ll bet her family will need a gallon of milk and all their cars tires will be flat and she’ll need me to get it for them!  HERO!), all the while getting himself to believe that if only one of them would play out, he’d finally be able to fill that “role of a lifetime, BOYFRIEND”. In all honesty though, these young men may truly have pure intentions (your Dad did). But having pure intentions does not qualify a young man to date.

Thirdly, on the indecisive thing, part of being a grown-up, is making decisions. Your Dad was quite good at weaseling his way out of ever making a decision. You know why?  I want you to get this.

It was because he was so unsure of who he was as a man, that he believed that a decision was right or wrong, based on the reaction of the girl he wanted to date.

This is BIG. It does not describe all guys. Some guys are decisive, but should also have their… EDITEDEDITEDEDITEDEDITEDEDITED. One of the things that makes a man worthy of respect, and worthy of a wife (and girlfriend), is the ability to make decisions with sound judgment, taking everything into account, including the people who would be most affected by it.

A boy who abdicates decision-making to avoid being perceived differently, can be just as harmful to you as a boy who makes horrible decisions, if you go along with it.

My last piece of advice is very much related to decisiveness and decision-making. At one point when your Dad was dating, he had bought a car with a down payment from a credit card. He had a part-time job, and ZERO bills aside from his auto-payment. He spent his money on fast food and video games, didn’t pay his car bill (had his parents do that), and then would decry his poor self. And his girlfriend would give him gas money to go to her house.  (This is not a fun memory to dredge up).

DO NOT DATE THAT GUY. Do not date a hopelessly romantic, incredibly caring, overwhelmingly sensitive, “says all the right things” kind of guy who is dependent on, and finds his identity in, YOU.

Don’t date your Dad (back then).

Here is how I introduced a sermon I just gave tonight.

I grew up as a pastor’s kid.  Because my Dad was a pastor, I figured I knew what a pastor was.

I saw Dad leave in the morning to go to church during the week.

I saw Dad stand up front and speak.

I saw Dad studying his Bible.

I saw Dad’s sermons that used big words and were covered in 4 different colors of highlighters.

I heard Dad begin sermons with an interesting story, and then relate it to the text he was about to teach.

I noticed that we generally had a cool place to eat on Sunday after church because people would invite us out.  I started to think that being a pastor might just be the coolest job ever.

Then I started to notice other things.

I began to notice letters that were anonymous and said terrible things.

I began to realize that there were certain people who weren’t very nice at church and didn’t treat my Dad like he was awesome like I thought he was.

I noticed when people would come over to pray, or would just say it in conversation, and realized pastors must need a whole lot of prayer.

I noticed that my Dad would wake up hours before me, sometime as early as 3:30, just to have quiet time.  I realized that pastors must be busy.

But I would also notice that at times he was overjoyed and thoroughly thankful.

I recognized that sometimes he said things when others didn’t.  Like at my school one time.  No one was saying anything…so he did.

And I was really proud of him.

One thing that I recall always appreciating about my Dad was that he always got up and went to church.

He was faithful to his mission.

But he didn’t ever give up on his mission.

And he continues it today.

I was preaching on Acts 20:17-38, and as I was going through it I had an overwhelming sense of awe at how God has equipped and sustained the men who have discipled me in their ministry.  None more so on this earth than Sam Rima.

Error: Twitter did not respond. Please wait a few minutes and refresh this page.